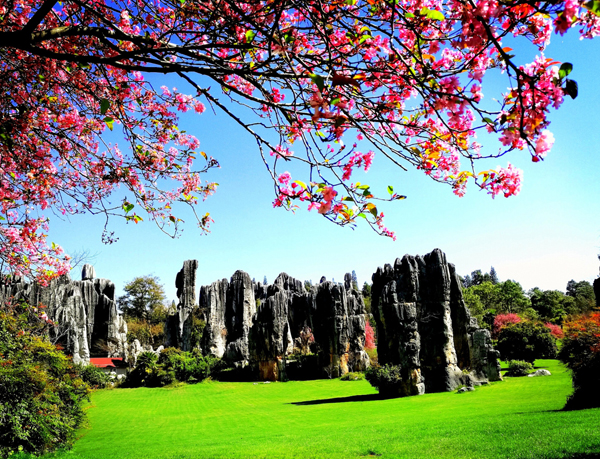 Located in Shilin Yi Nationality Autonomous County of Yunnan Province ,Stone Forest World Natural Heritage,the southern karst landform of China,has a total area of 1,100 km2,with the reserve covering a land of 350km2,The name Stone Forest is got for lost of limestone lava pillars distributing in the form of denseforests.Within the heritage area,large and small clusters of stone forests are distributed over the hillsides,the valleys and the billabongs.The Stone Forest Scenic Spot and Dark Pine Cliff(Naigu Stone Forest)Scenic Spot developed for sightseeing ,are the two Spots most representative of all.Stone Forest is the wonder of geological relic,a special type of karst landform.

Stone Forest was formed muder the favorable geological,climatic and hydrological condition.The dissolubil rock,a kind of carbonate rock,was cut by more than two groups of vertical crannies.Then eroded along crannies by water and creatures,the stone pillars were separated to form the Stone Forest wonder in thousands of the dissolved ditches.

The formation of stone forests has experienced a long and complex geological evolvement. During the Early Permian 270 million years ago,the area of stone forests was in sea environment where aggradations formed the limeston which was a few hundred meters thick.Later,with the raise of the earth’scrust,the stone forest area was at the fringe of the hot and humid ancient sea coast and thus the earliest stone forest was formed by erosion.With the spout of the closely following volcano lava, the stone forest was covered by thick basalt. From the long Mesozoic to early Cenozoic,stone forest area had been in the denudated and leveled state. The early Himalayan movement happening some sixy million years ago obliquely lifted the stone forest area and turned it into a inland lake(Lunan Ancient Lake)between mountains.Since the late third century,stone forest area has continuously uplifted and evolved towards the modern tableland river valley environment.During the increasing raise and under different geographical and climatic condition,the physiognomy of Stone Forest is still in inheriting, subrogating and superposing evolvement.

On the land of Stone Forest World Natural Heritage,there are stone teeth in growth,dissolved hills,depressions,eroded lake,funnel,water-eroded cave,underground river, natural bridge and waterfalls. All these have formed a panorama of karst physiognomy,having important and scientific value.

On the land of Stone Forest World Natural Heritage,the most  diversified stone forest karst modality is preserved and displayed,including sword shape,pillar shape,mushroom shape and pagoda shape, being the typical representation.Most forms of stone forest can be concentrated and embodied here. Therefore,it is a karst”museum”with complete collection of all marvelous sights of Stone Forest land scape and very high aesthetic value.

Stone Forest in Yunnan was listed in the first category of the world geoparks due to its antiquity and complexity in growth,diversity in modality and outstanding scientific and aesthetic value.

Stone Forest in Yunan—The wonder of the world

Stone Forest in Yunan—Should be prized and protected by the universe for ever.