A delegation from Chinese Academy of Sciences, China University of Geosciences, ...

A delegation, led by Liu Jiaqi, academician of Chinese Academy of Science, visited Shilin on March 20-21. Together with Liu Jiaqi were Dr. Xu Kejian, a professor of China University of Geoscience, the secretary-general of APGN, and two professors from the University of Myitkyina of Myanmar.
Liu Jiaqi, director of Chinese expert committee on world natural heritage site, gave some valuable comments on the scientific research, marketing, tourism development and other issues of shilin natural heritage on a symposium joined by the Bi Wenxiang, director of Shilin Scenic Area Administrative Bureau, and Mr. Gao Yunhua, vice director of Shilin Scenic Area Administrative Bureau. Liu praised the work done in Shilin over the last decades.
Shilin became a global geopark in February 2004 and has undergone 3 revalidations and was granted green cards. Dr. Xu Kejian put forward proposals on the work to be done for next revalidation since Shilin is now preparing for the forth revalidation during her visit in Shilin.
Popa Mount aspiring geopark and Shilin Global Geopark singed friendly partnership agreement in October 2018, which boosted the exchanges and friendship between the two parks and also the two countries. Professor Me Me Aung and Daw Khin from the university of Myitkyina of Myanmar said that Shilin was fascinating and impressing. 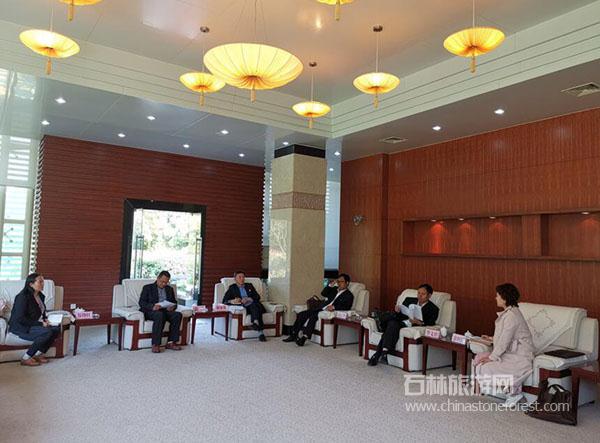